The Horror of Insomnia 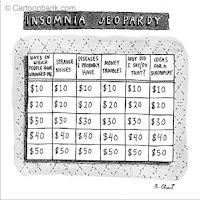 Until a few years ago I never had trouble sleeping. I could sleep anywhere, at any time, and for as long as I liked. It was something I took a certain pride in, like being able to play the piano or making a really good spaghetti sauce.

And then, something changed.

Until I experienced it for myself, I didn't understand insomnia. For me it's not so much the inability to sleep -- though Lord knows that's the horrid end result -- but the inability to quiet my mind.

In the vast emptiness of night's dark middle, thoughts repeat and echo in mad, broken-record rhythms. Long-buried memories unearth themselves and take on new, vivid life. Fears and worries creep out of the shadows and crawl into bed beside me. Would-haves, should-haves and could-haves moan and rattle their chains. Often, I swear I can hear the far-away, nautical sound of fog horns somewhere outside.

Insomniacs are haunted. Not by ghosts -- though a poet or storyteller might make an effective case for that -- but by our own lives.

(Though it's been years since I've read it, Stephen King's Insomnia was a disappointment to me in this respect. His protagonist, though plagued with a lifetime of regrets, wasn't troubled so much by his own thoughts and memories as by the things he witnessed during his late-night vigils.)

The cartoon above by Roz Chast made me laugh out loud when I saw it yesterday. (Click the image for a larger version.) I cut it out and put it on the refrigerator, and I've looked at it again several times since. It's hysterically funny, because it's so frighteningly spot-on.

Never heard of paradoxical intention -- but what a catchy name. I'll have to give it a try. And if it works, thank and think of you.

Speaking of words, the word verification for this comment is icibuble, which is the French for "I am Michael Buble." Scary, huh?

Sleep well tonight,my dear friend. If not I hope you have a great idea for a book etc and try like mad to get it down before you do fall asleep.