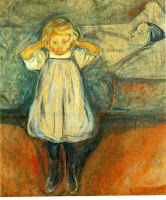 Sad and scary and, for me, a story idea.

ROMULUS, Mich. (AP) - An 8-year-old boy lived for more than a week with the body of his dead mother before anyone discovered his situation, police said.

The woman, 41, apparently died Jan. 9 in their apartment in the Detroit suburb of Romulus, and the boy survived in part by eating dried rice, butter and flour, authorities said.

Lee Saco asked to talk to the boy's mother, his brother told the newspaper, and the boy replied, "My mom's in a better place right now." He also said, "I tried to wake her up every day. I wanted to talk to her," Sam Saco said.

The boy was home-schooled, has no siblings and his father died several years ago, authorities said. The two had moved to Michigan from Louisiana after surviving Hurricane Katrina in 2005.

Police did not release the names of the mother and child. Foul play was not suspected in the woman's death.

The child is in foster care while police try to locate his other relatives, Romulus police Lt. John Leacher said.

Sam Saco told the paper Tuesday that he felt guilty he had not called police earlier.

"The things he went through," said Sam Saco. "I'm shaken. I'm almost about to cry. I've been thinking all night about the kid."
Posted by C. Michael Cook at 5:10 PM

That story makes my heart hurt.