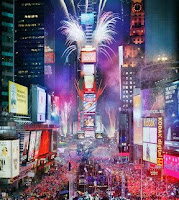 My Grandma DeMoss was a superstitious person, and she passed that quality on to me.

It's probably fair to say that superstitious people live in a state of constant, low-grade fear, and that all their lucky tokens and protective rituals are aimed solely at keeping that fear at bay.

New Year's Eve and Day always find me at my most superstitious. The enormity of one year passing -- with all its victories and defeats -- and another one arriving -- with all its unknown promise and peril -- kicks both my hopes and fears into their highest gear.

For instance, I like to have the Christmas tree and all the decorations taken down by New Year's Eve, to keep from dragging the old into the new. This is why I go through any unprocessed mail and make sure all the trash has been taken out as well.

And because I believe that what you do on New Year's Day you end up doing all year long, I try not to wake up hungover, to eat healthy meals, reconnect with an old friend, write and exercise and perform a good deed or two.

For the past several years I've also observed a New Year's Eve ritual of my own making, one designed to purge everything bad from the previous year. Using a clean white piece of paper or index card, I make a list (in black ink -- it matters to me for some reason) of all the things I want to leave behind. Bad habits, negative qualities, toxic people and situations... whatever's brought me trouble gets written down. Some years the list is long and very specific; on others it's relatively short and general. This year's was somewhere in the middle.

I seal the list in a clean white envelope and write the year on the front (black ink again), then I gather a large tin can, a bottle of lighter fluid, a book of matches and a dollar bill, and take it all out to the shore of Lake Michigan, which is just a block from my house.

After inserting the envelope in the can and dousing it with lighter fluid, I set it on fire. As it burns, I mentally say goodbye to all the items on my list. Some years it takes a long time for it to turn to ashes. Occasionally it needs to be lit more than once. In the frightened, hopeful world of the superstitious, these things all mean something.

Once the fire has died and the ashes have cooled, I toss them into the lake, being careful not to get any on me. Then I release the dollar bill, as a way of saying thanks for all the good things the year has brought and bringing a bit of good luck to whoever finds it later on.

On my way back home, I get rid of the can somewhere away from the house.

For me, 2008 has been a year of much extended good and only a little bad, all of which arrived in short, sharp doses, and for that I'm grateful. I hope you can at least say the same, or something even better.

Another little ritual I observe is not wishing people a happy new year, but a happy whole year. After all, why should our good wishes for health, happiness and prosperity be limited to just the first few days of January?

A tradition that was passed on to me from a friend:

As close to midnight as possible on New Year's Eve, gather up all of your calenders from the now ending year and toss them in the fire place and burn them.

I did that with great relish this year as 2008 was pretty lousy.

I'm frightened by how much of my thought processes are documented here. Damn zodiac.

No doubt a fine witch or wiccan you were in a former life, Michael. Very cool rituals! You know there's a story in there...a really good one. You've got my idea juices flowing for sure.

I amend my comment in your more recent blog post (which I read first) to wish you a Happy Whole Year!

Thanks for the comments, folks -- and for passing on your own NY rituals. Turns out it's a very superstitious time for a lot of people.

And Fran, if you want to do something with the idea, please be my guest. It's yours for the taking.