Dream Theater: The Forest, and the Mountains Beyond


I was on vacation, at a large resort, with several other people. Some were friends, and some were people from high school I remembered not liking very well. But we were all vacation together now, and we were going to have a great time.

The resort had everything—restaurants and bars, shops, a spa and casino, plus lots of outdoor spaces for swimming, golf, tennis and hiking.

It was an improbable paradise, tucked away somewhere far from everything else. There was a vast forest off in the distance, and mountains even further beyond.

We split up, each of us heading off to do whatever we wanted. But first we traded phone numbers and put ourselves on message groups so we could stay in touch and meet up later.

A few minutes later, after everyone had gone, the problems started.

First, it turned out I had more than one phone with me, and I couldn’t figure out which one had everyone’s numbers on it. Some of the phones had just a few, others only had one, several had none at all.

Second, some of the phones were old. There was a Palm Pilot and a Motorola Razr mixed in with them, and some others that were more like children’s toys, made of cheap, light plastic that was cracked. A lot of the batteries were dead.

Third, even when I found a phone that was working, with at least a few numbers that I needed, I discovered there was other information mixed up with them. MP3s, old ringtones files, photos from trips and vacations I’d taken long ago, haphazardly stored where they shouldn’t have been.

Fourth, the resort turned out to be a lot bigger than it looked at first, and soon I was hopelessly lost. I wandered around, looking for something I recognized and could return to. But all I could see was that vast forest in the distance, and those mountains even further beyond.

I finally found a little building, not much more than a gazebo, and sat down in it. I was tired and hungry and not sure what to do. That’s when a kind-looking older woman appeared, and sat next to me.

She had a phone with her, too, and showed it to me. She said it was giving her problems and she was having trouble using it. By any chance, could I help her?

She handed it to me, and I saw that she had the same problem as me. There were photos where they shouldn’t be, web pages mixed up with emails, random phrases and icons where there should have been phone numbers.

I returned the phone to her and apologized for not being able to help. She thanked me for trying and walked away. Toward the vast forest, and the mountains even further beyond.

Maybe, I thought, everyone in my group was having the same problems as me. Maybe we were all separated, lost somewhere in this enormous resort, unable to contact each other or find our way back.

That’s when a few people from my group appeared. The people from high school. The bullies and burnouts who I’d never been friends with and didn't really want to see again.

“There you are,” one of them said. The others laughed maliciously. “We finally found you.”

I got up, and ran. Into that vast forest, and the mountains further beyond.
Posted by C. Michael Cook at 10:19 AM No comments: 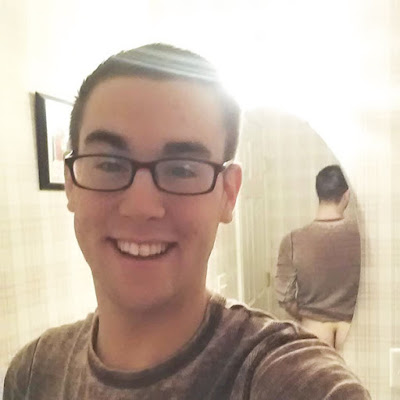 I was in a house that didn't belong to me, standing naked in front of a full-length mirror, taking selfies with my phone.

When I'd finished I was pleasantly surprised at how good I looked. In the photos I was trimmer and more muscular than I am in real life.

Before I even realized what I'd done, the photos had been shared to Facebook.

A few moments later I was trying to remove them, and couldn't. My connection to the internet wasn't stable. Facebook was freezing and unable to delete my post. It was too late to do anything about it.


The "likes" were already starting to come in.
Posted by C. Michael Cook at 10:28 AM No comments:

I was driving to a large party, at a house somewhere in the suburbs of a big city. But a few minutes after arriving I decide to leave and buy a pack of cigarettes.

I ask for directions to the nearest store, but no one seems to know where one is, so I strike out on my own. I walk a few blocks and find myself in a commercial district, near an advertising agency where I have some kind of job. But instead of the high-rise where its offices should be, the agency is now located above a second-hand store.

Inside the store it's a mad jumble of old furniture, decorative items, housewares and clothing, books and dolls and toys. Looking around, I realize that it could be better organized and more successful than it is.

My job at the agency doesn't keep me very busy. I'm not one of the more popular or well-regarded employees. So I have some time on my hands. I wander through the store's many rooms until I find the manager, tucked away in a small office in the back.

She's a timid, older woman, and I've interrupted her lunch. But I tell her I want to volunteer at the store, and rearrange all its merchandise. By color. I tell her there will be a blue room, a green room, and so on. She's not convinced that my plan is a good one.

In the meantime, A_____ and several of my coworkers at the agency have returned from their own lunches. They come into the store, laughing and talking, and sit down at a kitchen table in the front. They show me a new trivia game they've all downloaded to their phones.

I play it with them, and it turns out I'm good at it. Really good.
Posted by C. Michael Cook at 10:34 AM No comments: