My good friend B_____ contacted me about a woman he knew named N_____. He told me she suffered from environmental disease—chemicals were making her sick—and was interested in buying a typewriter.  He also mentioned that she was interested in writing her autobiography and in search of a ghost writer.

I was capable of helping N_____ with both of these things.

A meeting was arranged and I met N_____ at her condo. It was unusually sparse inside due to her condition, decorated with only a few items made of natural fibers and materials. There was a safe room somewhere in the back, but I wasn't invited to see it.

N_____ herself appeared to be quite healthy, even vigorous, and she soon took charge of the conversation. She told me all about the typewriter she was hoping to find, the book she planned to write with someone’s help, the activism she was involved in on behalf of environmental illness and all the travel it required.

We seemed to hit it off and I left the meeting feeling as though I’d just lucked into something big.

Several days later I saw N_____ again completely by chance. But she didn’t seem to recognize me, even when I reintroduced myself and reminded her of our meeting.

Fortunately my friend B_____ was there. He suggested we go for a walk. While we did he explained that the deal was off—the typewriter as well as the autobiography.

Marcia’s health had taken a turn for the worse. Soon she’d be leaving for a clinic in Malaysia, and treatments of an indefinite length. Everything else had to be put on hold indefinitely.

I had to wonder if her flare-up had anything to do with meeting me.
Posted by C. Michael Cook at 10:04 AM No comments:

Dream Theater: A Gift for Mom


Christmas was coming and I still needed to get a gift for my mom. It had to be something special, because she'd been gone for over twenty years. But money was tight.

I went to Younkers, where their motto was "Satisfaction Always." It had always been her favorite store when she was alive.

But when I got there, the Younkers I remembered was gone. The store had fallen on hard times. Entire sections stood empty. Some hadn't been used in years. Piles of dead leaves gathered in the corners.

I kept shopping anyway, hoping for something that would be just right. Then I found a gray long-sleeve t-shirt that came with a special bleach pen you could use to write on it. I'd personalize the t-shirt for her. She'd love it.

The pen was hard to handle. The writing didn't turn out as neatly as I'd hoped. The bleach soaked into the fabric, making everything impossible to read. Soon, where my message was supposed to be, there was only an ugly bleached square.

I couldn't give this to her. I wondered what to do. Then I remembered the Younkers motto. "Satisfaction Always."

I'd take the shirt and pen back to the store. I'd complain that the pen hadn't worked the way it was supposed to. I'd get my money back, and I'd buy something for her somewhere else.
Posted by C. Michael Cook at 12:15 PM No comments:

I followed him during the day as he went about his business at Facebook. I spent evenings at home with him and his wife.

I knew he was having a hard time lately, what with these Congressional hearings and all. I did my best to be extra supportive. I told him he did a great job. I said this would all blow over eventually. I promised everything would be okay.

But the truth was, I didn't even like Mark Zuckerberg. I felt that he'd embarrassed himself in front of the Senate's Commerce and Judiciary Committees. I knew everyone was laughing at him behind his back. I believed he was a hypocrite. I even thought he looked old.

Gone was the young and idealistic Mark Zuckerberg. Gone was the prickly but still visionary titan of The Social Network. In their place was this Mark Zuckerberg: rich beyond belief but empty inside, so corrupt and craven you could see it just by looking at him.

But I kept my mouth shut. Being Mark Zuckerberg's friend was a pretty cushy job. I didn't know where I'd find another as good.

Every day, I worried that he'd somehow find out what I really thought, how I really felt. Because he owned Facebook. He knew almost everything there was to know about me.

Sooner or later, his algorithms would alert him to who and what I really was. It was only a matter of time. And then what would I do?
Posted by C. Michael Cook at 4:07 PM No comments:

Dream Theater: What I Did, and What It Did to Me

I had sex, to begin with. Wild, abandoned, fuck-you-like-an-animal sex. With T_____ and some other guy. Right here at home. In almost every room of the house.

The neighbors and their son and all his teenage friends saw it. Apparently the blinds had been left open just enough for them to watch the whole thing. Soon J_____ knew about it too, then his mom, and then his entire family.

He broke up with me immediately. No questions or discussion, even though I pleaded with him to reconsider, to wait for at least a few days, to give me another chance because it had only been a one-time thing. I promised I'd never, ever do it again.

The truth was, I wasn't even sure how it could have happened, how I'd made such a foolish and irresponsible mistake. And then, on top of it, to be found out by nearly everyone else. It just seemed unbelievable. Yet everywhere I went there were knowing looks, smirks of disapproval and scorn.

I ran away. It seemed to be the only choice. I got in my car and drove. First to Iowa City, but the news arrived before I did, then all the way to my high school in Knoxville. Even there, people knew what I'd done. They'd seen it just as surely as the people next door.

All the students and even some of the teachers hassled me about it. They called me names and pushed me away. Moving from one classroom to the next was the worst. The hallways were packed so tightly I could barely move.

How would I make it through the rest of the school day? At least it was a Friday, I thought. That would give me the weekend to lay low and figure out what to do, some way to make things right.

Then I realized that leaving early might be the best thing. I fought against the crowd to get myself turned around and headed toward the office so I could let them know.

I was almost there when I remembered I was an adult. I wasn't in high school any more, I didn't need to be there, I didn't have to tell anyone that I was going.

Outside the building I found a beautiful spring day of blue and green. The school was on top of a very high hill. At the end of a long staircase, with many landings and wrought iron gates across each one, I could see the street, and freedom.

A cop waited at the bottom. I didn't say anything to him. I just kept walking. I was so relieved to finally be out of there, and promised myself that somehow I'd figure a way out of all this mess.

Then there were two cops. The first grabbed the back of my shirt. The second stepped in front of me and asked, "Where do you think you're going?"
Posted by C. Michael Cook at 11:19 AM No comments:

I was in New York City, "living my best life" by waiting tables and pursuing a career in male modeling.

And somehow I'd managed to book a job with The Gap, doing runway work for their new spring/summer collection.

On the day of the show I found myself in a large room filled with at least two dozen handsome and fit men. Looking around, it was obvious that I was both the oldest and the heaviest person there.

The director of the show--yet another good-looking guy, with a man bun and an imperious air--told us all to line up by age and weight. Once we did, he explained how things were going to work.

"Those at the end of the line will model the swimwear," he said. Then he smiled. "I know that might make some of you turn green."

Each of us received our clothes for the show. At least mine were board shorts and not tiny trunks. Still, I wasn't comfortable. I couldn't figure out what concept they were going for. Why have the oldest and least fit of us model the swimwear? I wondered if this might be some kind of elaborate joke, a way to end the show with a big laugh. Or a ploy to gain more media coverage with what would surely be described as a "brave choice."

We went to individual dressing rooms, and while everyone else was changing I snuck out. I didn't say anything to anyone. I just left the building with my head down, hoping no one would recognize me. I went to an ice-skating show instead, relieved to be somewhere cold, where all of us had to be fully dressed.

Dream Theater: Everyone Is Angry With Me 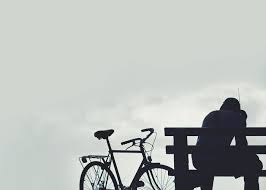 I don't know what I did. But everyone was angry with me about something. It didn't seem to be about anything in particular. It seemed to be about everything in general.

J_____ wouldn't speak to me. For days we'd been locked in one of those silent fights. No matter what I said or did, it was all met with a stony wall.

My mother was furious with me, too. We were making lunch together and she was banging things around in the kitchen, slamming cabinet doors, refusing to look me in the eye, turning her back to me, with her lips pinched shut in that way I remember from childhood.

Even strangers seemed to be holding a grudge. A woman I'd never met before, who'd organized a group of bike commuters at the office, didn't want me to be part of it. After asking why several times she finally admitted that she'd heard some bad things about me. She didn't think I would be a good fit for the group, and suggested I just try to enjoy riding my bike to work alone.
Posted by C. Michael Cook at 11:58 AM No comments: