An Experiment in Sleep Deprivation - HyperiCon 4

I arose at 4:30 on Friday morning in order to drive to Nashville, where HyperiCon is held. I finally went to sleep around 2:30 the next morning. Lather, rinse, repeat, and you'll get a good idea of what my three-day experience in Tennessee was like.

The details? Plenty of those. Some I even remember. 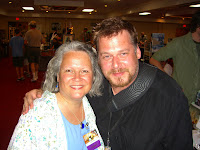 For example, seeing my pal John Hornor Jacobs. (That's John with Fran Friel. More on her below.) John and I roomed together at the con, and it was his idea to bring some snacks to keep in our room. If it hadn't been for this wise suggestion, we wouldn't have had much to eat (or drink -- but more on that later) the entire weekend, because the conference hotel was inexplicably without a restaurant or bar. In addition to his uncanny prescience John's also a terrific writer, and gave me the manuscript of his first novel during the con. I've already read the first four chapters, and survey says we have a winner. John also has three -- count 'em! -- shorts slated for publication. (For a different view of the weekend's festivities, including a terrific and funny video, check out John's blog, Bastardized Version.) 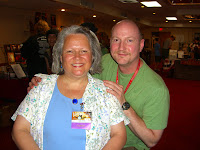 One of the people I was most looking forward to meeting is Fran Friel, whose new book, Mama's Boy and Other Dark Tales was recently released. In addition to being one of the nicest people you could ever meet, Fran has a hidden dark side which she gives free reign when it comes to her fiction.

As a result, Mama's Boy is filled with stories that are both lovely and troubling at the same time -- a tough act to pull off. She also makes a great dinner companion, which John and I discovered Saturday night. We went to The Melting Pot, a restaurant that specializes in fondue which, contrary to all rumors, has not completely gone the way of Pet Rocks and key parties.

Chatting with fellow Illinoisan Steven Shrewsbury was also a high point. Shrews, as he's called, is the author of the just-released Hawg, as well as a dozen or so other books, and just about as many more on the way. With a full-time job and family, I don't know how he does it. Shrews is also one of the most... um, animated?... readers you're likely to see. Seriously, if Steven Shrewsbury schedules a reading at your local bookseller, show up. If you don't, you'll be left wondering exactly what everyone else is talking about.

Saturday night saw several parties. My favorite was the Apex bash, hosted by Apex Book Company editor-in-chief Jason Sizemore, editor Mari Adkins (who I shared more than a few good laughs with), and graphics guru Justin Stewart. Apex is the publisher of Fran's new book in addition to many others, along with Apex Digest. For my money (and they managed to make off with a bit of it) Apex puts out some of the best-looking and -reading publications out there. Naturally, they put on a great party, complete with a truly horrifying shot concoction called "scrambled brains." 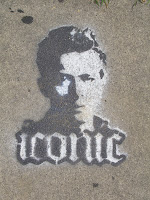 Seen, painted on the sidewalk, while I was in downtown Nashville.

Sunday didn't amount to much for me, other than a long drive back to Chicago with a sack of ten White Castles in the passenger seat, purchased to nurse my hangover. While I was glad I went, I was glad to be back home as well. Because I knew I was finally going to get some sleep.
Posted by C. Michael Cook at 8:58 AM