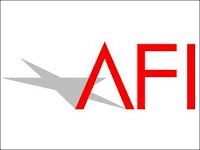 But that's exactly what the American Film Institute has done. Since my last post on this topic, the AFI has sent me two unsolicited emails.

The first was particularly amusing, since my original email to them was complaining about their "Ten Greatest American Films in Ten Classic Genres." It says:

Thanks for sharing in the excitement of AFI's 10 TOP 10, the newest chapter in the American Film Institute's ongoing celebration of American cinema.

(Yeah, well, I wasn't sharing the excitement. I was sharing my disappointment. But I guess it's all the same to you, right?)

We invite you to visit the TV show's companion Web site at AFI.com for fascinating details on all 100 movies, including exclusive videos of leading film artists. You can add your own comments and test your movie IQ with AFI's Movie Quiz: 10 TOP 10.

(Uh, already been there, done that, wrote to complain about it.)

It goes on from here, yammering about their upcoming salute to Warren Beatty and all the exciting extra features they have stored up at the web site.

It's not that I'm outraged about receiving unsolicited emails. My inbox is filled with them, and at least the American Film Institute isn't trying to sell me a high-quality replica Rolex or something with an all-new formula that promises to make my bedroom love times last longer.

But still. I wrote to complain. Given that simple fact, I'd say the chances of me being predisposed to receiving promotional emails from AFI are pretty slim.

Apologies to anyone who took my advice to write the AFI about their "Ten Greatest American Films in Ten Classic Genres" and, as a result, has been getting these annoying emails as well.

The unsubscribe link is at the bottom of their emails. Use it.
Posted by C. Michael Cook at 10:11 AM