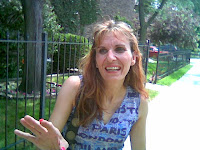 The first time I met Diane it was about 7:00AM on January 23, 2008. I know because she rang the doorbell and I went down there in my robe to answer it. It was really cold out that morning, still kind of dark. I listened to her story and, because it was early and cold and I probably wasn't thinking clearly, I gave her five dollars. Later on that day I wrote a journal entry about it.

The second time I met Diane was today at 1:00PM. I was headed downtown and Diane was just leaving one of my real neighbor's doors. As soon as she saw me her face brightened and she walked right up to me.

"My name is Diane and I'm your neighbor and my mother just had a heart attack..."

I recognized her right away. "Your mother had another heart attack?"

She stopped for a second. "And I'm her only daughter and she's in the hospital in Des Plaines and..."

"You came to my house last January with this bullshit story," I said. "I gave you five dollars then and you never paid me back."

Give Diane this much credit: she knows when she's been busted.

I pointed to her purse. "How about you pay me back right now?"

"I'll do it tomorrow. I'm not the sort of person to bother my neighbors..." She started walking away. I followed her.

"So, do you do this sort of thing full time?"

She stood up a little straighter. "I have a full-time job."

"Walgreens, right?" She nodded. "So this is just part time I guess?"

"Yeah. I'm real sorry. I'm not the sort of person to bother my neighbors. I won't do it again."

I took out my phone. Diane got a nervous look on her face. I took her picture before she knew what was happening. "Now I've got your picture," I said. "I'm going to make signs with it and post them all over the neighborhood so people will know you're full of shit."

Diane apologized once more, and swore she wouldn't do this again, and finally crossed the street in the middle of the block to get away from me.

Now, if I'd gotten the slightest inkling that Diane was developmentally disabled or truly in need I wouldn't have given her such a hard time.

People like Diane really annoy me. After living in the city for 20 years I've heard too many stories like hers. The tellers are always frantic and desperate and all too willing to prey upon your emotions and what little sympathy you have left for your fellow human beings.

Once, a woman came to my door saying her daughter was in the hospital and she needed cab fare to go get her. Another time, it was a black woman who said she was bleeding real bad "down there" and needed cab fare for the same reason. While I was impressed by her originality and use of such an urgent detail, she didn't get anything from me. I can think of at least a dozen more like this.

These folks put you in such a bad position. If you give them money, you wonder if you're a chump. If you refuse, you wonder if maybe that person was the one who really was in trouble.

Then again, maybe they all are. Just not the kind they're telling you about.

As a result I hardly ever help strangers who ask for assistance, which is pretty sad.

Diane and her kind make the world a worse place, and me a worse person.
Posted by C. Michael Cook at 6:24 PM

You're kinda hardcore, Michael. That's awesome, busting her on her bullshit.

The thing about my neighborhood is I'm the one usually borrowing shit. "Hey, um...can I use your hedge trimmer?" Or, "Hey, I've misplaced my rake. Can I borrow yours?"

But if you need a cup of milk, or a stick of butter, send a child.