The Rich Get Richer 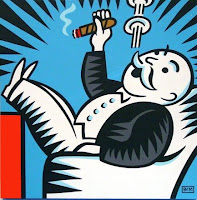 The economy is in recession. The value of your home is in the shitter, along with your IRA and 401(k). Your job looks shaky and unemployment is up, again. Gas is over $4.00 a gallon. And because of that, the price of everything is also heading skyward.

Good news seems hard to come by these days, so I'm sure you'll be as happy as I was to learn that a new AP IMPACT survey found compensation packages for CEOs continued to climb last year, despite the poor performance of their companies.

The median CEO pay package -- meaning that half made more and half less -- reached $8.4 million in 2007. This includes salary, bonuses, stock options and grants, deferred compensation, fringe benefits, perks, tips, big fat cigars and pony rides for the kids.

In all fairness, that's up only 3.5% from 2006. Which is probably around the amount of your raise last year, if you were lucky enough to receive one. But where that bump may amount to a couple thousand extra dollars in your annual paycheck, it adds up to a $280,000 gain for the median-earning lady or gentleman occupying the corner office.

Of course, some CEOs did better than than others.

Last month, Rick Wagoner, CEO of GM, announced the closure of four truck and SUV plants due to flagging sales and the high price of gas. This followed a $39 billion-with-a-B annual loss and a 19% drop in stock value. Way to keep a steady hand on the wheel, Rick, and well worth a 64% raise, which brought his annual salary to $15.7 million. 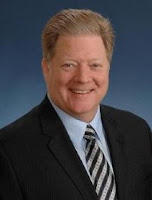 Jeff Mezger is CEO of KB Homes, which has been battered by the mortgage crisis and stalling home sales. Through it all, Jeff's able management guided his company to a $930 million loss and an accompanying 60% drop in its stock's value. For results like this, Jeff was awarded with $24.4 million in 2007, including a handsome $6 million bonus. Though for exactly what, I cannot say.

Profit at insurer XL Capital fell more than 80 percent last year, and its stock price slumped about 30 percent. But Chief Executive Brian O'Hara made $7.5 million, a raise of 23 percent. Obviously, this is a guy who knows how to fill out a self-evaluation form.

Meanwhile, jobs leave our country for sunnier and less regulated climes. 47 million Americans live without health insurance, but with the constant fear they will some day need medical care. And the United States goes to hell without even the benefit of a hand basket.

It's hard to say, but one thing is for sure. Times as good as these simply can't last forever.
Posted by C. Michael Cook at 5:07 PM