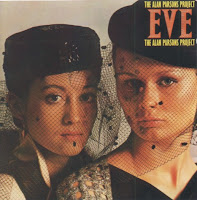 You may be thinking, "Wait a minute. This is a blog about horror. What's with the late-seventies prog-rock album cover?"

And if you'd never taken a closer look at The Alan Parson Project's 1979 release, Eve, you'd be justified in thinking that.

But if you have, you already know why I posted this. Because it starts out looking perfectly normal and ends up being perfectly horrifying.

Go ahead and click on the image -- I went to great pains to find the largest, highest-res version available. Take a look. Then look closer.

I saw this album cover several times in the store before I really looked at it. But the day I did -- on a Sunday afternoon, at a record store in a Des Moines, Iowa mall -- I was at first shocked, then disgusted, and finally, thrilled.

I'd been suckered, and now I was in on the joke, and I loved it.

I wish more frightening films and fiction took this approach. The other night I started watching Saw III. It opens with a man sawing off his leg, and lingers on all the gory details. And I turned it off after 15 minutes, because when something starts at 11, there aren't too many other places it can go, other than serving up one more 11 after another.

This attitude probably won't endear me to the younger generation, for whom the Saw series is aimed. But like everyone else they'll get older some day. They'll have seen it all and wonder why none of it satisfies them any more, and then they'll understand.

When something sneaks up on you -- appearing at first to be one thing, lulling you into a comfortable place, and then later revealing itself to be something much, much worse -- you really do get a shock from it.

When something bad happens to a character you identify with and care about, you really do feel it.

When tension is created and then released in an act of horror or violence, you really get your money's worth.
Posted by C. Michael Cook at 6:55 PM

I can't tell what's going on under their veils. Are they bruised or something?

It's hard to tell in the photo. Sorry, this was the best version of the cover I could find.

The far sides of both women's faces have many sores, scabs and warts on them.

The veils -- and the dots on them -- intentionally obscure that.