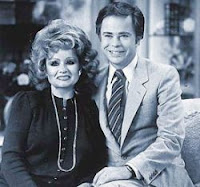 The complete PTL Club tapes are going up for auction. The estimated value is $8 million.

Whether you consider this horrifying depends on how you feel about Jim and Tammy-Faye Bakker, the spectacular fall of their evangelical empire, and heavy make-up.

The show ran from 1974 to 1987, capturing over 15,000 hours of pathos and greed in the name of the Lord. The Bakkers sing and preach, raise money, build churches, campgrounds and theme parks. Later, everything is consumed in the smoke and flames of a sex scandal, fraud conviction and prison sentence for Jim while Tammy-Faye tries and fails to keep a smile painted on her face. Seen in its entirety, PTL may be the longest-running reality -- or surreality -- show in television history.

You know some network, somewhere, is going to get those tapes. After that, it's just a matter of time before they hit the airwaves -- what a charming, inaccurate phrase -- once again.

Just a word of advice to the winning bidder: Find a good editor, one with a lot of time on his hands and a sharp eye for both the absurd and the tragic.
Posted by C. Michael Cook at 7:55 PM

Wow. We spent a lot of time making fun of that show when I was a kid. Of course, our entertainment was free back then and we didn't have cable, so our options were limited. I doubt I'd be willing to pay to watch it.

Somewhere around 1980, I had the dubious pleasure of a brief meeting with the Bakkers. Much more slimy seeming in person, by the way.