News today that corporate welfare queen American Insurance Group has just paid out tens of millions of dollars in bonuses to its executives.

The self-destructive insurance conglomerate has received more than $170 billion dollars over several rounds of corporate bailouts since September of 2007. Last quarter, it posted an astonishing $61.7 billion loss -- the largest in corporate history.

And yet, the very executives who surely bear some responsibility for that loss and AIG's current financial state are being rewarded with more money than many taxpayers -- who are now footing the bill -- may make in a lifetime.

AIG claims the bonus payments are contractually obligated, which makes me marvel at what must be some pretty remarkable contract terms dictating generous bonuses even in the face of catastrophic losses.

One wonders what kind of gravy these executives would be taking home if the company was actually making money. 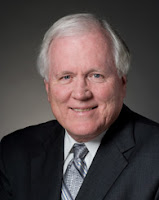 AIG Chairman Edward Liddy -- that's his smugly satisfied face on the left -- defended the bonus payments in a snipply worded letter to Treasury Secretary Timothy Geithner. "We cannot attract and retain the best and brightest talent to lead and staff the AIG businesses, which are now being operated principally on behalf of the American taxpayers - if employees believe their compensation is subject to continued and arbitrary adjustment by the U.S. Treasury."

To which I say, if this mess is what your "best and brightest" is capable of, I'm willing to fire them all and let the night-time security staff take a crack at this thing.
Posted by C. Michael Cook at 10:50 AM

This is sick. Why in the world are we helping these companies that keep sending millions to people who do not know how to run a company? They cry yet get paid millions on the "average joes" taxes. Furthermore, I fear this is just the tip of the iceberg. Look what Enterprise rent-a-car did to get bailout funds:

Not to make excuses for these people, but the bailouts are making crooks out of everyone that touches the money.

And everyone at my place of employment is probably going to get furloughed to help with budget cuts. Why can't those A-holes suck it up and not take their millions of dollars worth of bonuses?