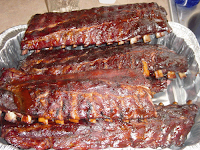 In related news, as part of the research I'm doing for a novel, I interviewed a funeral director earlier this week. During our conversation he confessed that ever since entering this line of work, he's been unable to eat ribs.
Posted by C. Michael Cook at 3:05 PM

My pathologist friend says that salivation during an autopsy is normal.

The Hawaiians had a name for scrumptious Homo Sapiens barbeque. They called it "Long Pig." I love that.

I don't know how I got onto cannibalism this morning. Haven't had breakfast yet.

African cannibalistic tribes used to call missionaries "Long Pig" as well. Good use for them, I think.

Long pig... I couldn't help but be reminded of that very thing while reading Stephen King's "Lisey's Story," because throughout the book he refers to the "Long Boy."