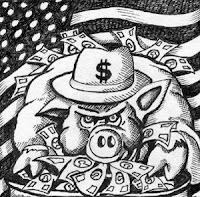 The news about Freddie Mac and Fannie Mae -- and now AIG -- has inspired me. I think now is the time the United States government provided me with a bailout plan.

A bit less than a year ago I left a great job to focus on writing fiction full-time. Some may have argued with the wisdom of this decision, describing it as risky or even speculative. However, times were good, I was feeling optimistic, and believed that if things worked out the upside of my actions was almost limitless.

I've since sold two short stories -- which is great! -- but the few hundred dollars I earned from them hasn't been enough to cover my expenses. (Worse yet, some publications I sent stories to did not buy them, which had a further negative impact on my earnings.) Consequently, a significant portion of my savings is now gone and the truth is that I simply cannot continue writing full-time without some assistance from the government.

Some may blame my current circumstances on poor management. To them I say, no one could have predicted the dilemma I now face and, frankly, I consider it to be one of those "once in a century" things that just can't be helped. Would more or less regulation have made a difference? I believe it would take a federal commission, several years and a great deal of taxpayer money to get to the bottom of it all.

However, it would take only $1 million dollars for me to continue my current operations. While that is a lot of money, let me remind you that it will be used to keep hard-working Americans -- such as the folks at my mortgage holder, the utility and credit card companies, the grocery store and gas station -- employed. I might even find myself in a position to create jobs with that kind of cash on hand. I think it would be nice to have a cleaning lady come in once or twice a week, and I've been wanting to update our kitchen and bathroom for the longest time. Withholding that million dollars -- and allowing me to go under -- would only end up hurting more people in the end.