La La Land won the Academy Award for Best Picture of 2017. Until it didn't and Moonlight was named the actual winner. 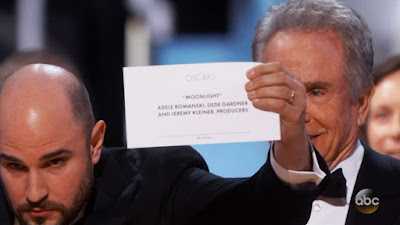 This article from the New York Times does good job of explaining what happened, and this one from Vox.com does an equally fine job describing how. If you watch the full video, keep your eye on the background action -- it's where all the interesting stuff happens as the truth slowly dawns on everyone involved. You can see the La La Land producers look around with increasing urgency; at one point Emma Stone mouths the words "Oh my god." There are howls of disbelief and celebrities pulling out their phones to take pictures, just like those tourists host Jimmie Kimmel invited to visit the show. Despite a great deal of awkwardness, everybody involved handled the situation with tremendous honor and grace.

What I have yet to see is anyone discussing the increasing frequency of events like these. I don't know what it means. It might not mean anything. All I can say for sure is that it feels like history is getting really good at hitting holes-in-one, and now it can't stop itself from showing off.
Posted by Unknown at 3:58 PM