If Other Government Services Were Run Like Private Health Care 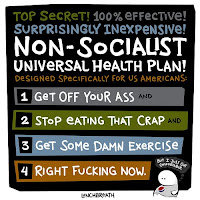 What those who equate "government-run health care" with "socialism" seem to forget is that socialism already exists in America, and has for a long time. The government already runs all kinds of important services that people need every day.

So I thought it would be interesting to look at how these other "socialist," "government-run" services we depend on would operate under a pure, free-market system similar to American health care.

THE WATER DEPARTMENT
Without a job, you probably won't even have access to water. More and more companies can't afford to provide their employees with water. If you can afford it, you can buy water on your own. But you'll pay a much higher price than most people. However, that water can't be used for a lot of things, like showers or washing the dishes. And if you ever need "too much" water, the Water Department can cut off your supply.

EDUCATION
The more children you have, the more you'll pay to send them to school. If one ever has trouble in a subject, like math or reading, their case will go before the school board, which is staffed by a bunch of twenty-somethings who follow a strict set of rules. They'll look at your child's report cards and decide whether his or her teacher can spend more time with them on that subject, or even get tutoring. If the school board can refuse extra help or tutoring for enough kids, they'll get a big bonus at the end of the year! Which you'll pay for!

THE POLICE
If you've ever called the police before, you could never call them again for the same reason. That means if your neighbor is playing music so loud your bedroom walls are shaking at four in the morning, you'd better think long and hard before calling the police about it. Because the next time your neighbor plays music too loud, the police won't respond. They'll consider it a "pre-existing condition" and you'll be out of luck.

GARBAGE COLLECTION
In order to have your trash collected, you'd have to fill out an application listing all the times your trash had already been collected, and all the things you threw away. If you ever needed to get rid of something you forgot to list, the Department Sanitation could refuse to pick it up. Even if you had listed it, they might refuse to pick it up anyway. See "The Police," above.

YOUR GOVERNMENT
Without access to a lot of money, you won't be able to communicate with the people who've been elected to represent you in state and federal legislatures. Sure, they might set aside a night to meet you and a lot of other people for an hour in a church basement or high school gymnasium. They might even pretend to listen to what you say. But afterward, they'll be having a nice dinner and drinks with someone who's willing to pick up the bill. They'll listen to everything that person has to say, and probably do whatever they want.
Posted by C. Michael Cook at 9:10 PM

This is hilarious. And too true.