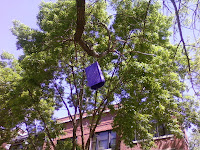 A few days ago something purple appeared high up in the trees overhanging Birchwood Street.

At first, it was easy enough to dismiss as a shopping bag that had been lifted by the breeze and been tangled in the branches. But today, on closer inspection, it revealed itself to be something more.

It appears to be made out of corrugated plastic. I'm not sure if it's a purple box, or a some sort of lampshade, or something much more odd and strange.

Whatever it is, you can see that it didn't get there by any kind of accident. It's been attached to the branch with a twisted length of wire, by someone who obviously went to great trouble to do so. It has to be at least 20 feet above the ground.

Stand beneath it and you can see some kind of metal frame inside, and a few pieces of paper that have writing on them.

The whole thing is a bit bizarre, to say the least. I'd love to know who put it up there and why. But I can't exactly go door to door and ask. The purple thing in the trees is weird, but doing that would be interpreted as downright crazy.

So instead, I'll have to make up my own explanation. It goes like this: The purple thing is a talisman of some kind, installed late at night by a practicing witch living in one of the buildings close by. She -- or he, no point in being sexist, after all -- put it up there to trap a malevolent spirit that has been creating trouble for some time now. The spirit is now caught inside, swirling around, growing more and more enraged with each passing night. Soon, the spirit will break loose, and wreak havoc on us all as revenge.

Or maybe I'll just call the alderman and ask to have it removed.

UPDATE -- I wrote the following email to the alderman's office:

This evening, they replied:
So. I was right about the purple things being a trap of some kind, but for evil bugs, not evil spirits. Too bad.

They say that truth is stranger than fiction, but a lot of times it isn't.