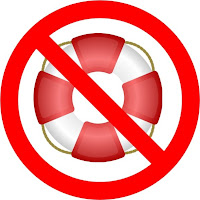 To struggling homeowners who are in danger of foreclosure and hoping for some assistance from either their lender or the government, I have some advice.

Yes, I know the government is bailing out AIG and the investment banks and the mortgage lenders who caused this whole mess to begin with. I’m also aware that now the automakers – who cranked out gas-guzzlers by the millions while their CEOs and executives never imagined that oil might some day rise above $30 a barrel, yet literally made out like bandits – are also lining up to the public trough with their hands out and shit-eating grins on all their faces.

So given all that, why shouldn’t you, Mr. and Mrs. Homeowner-in-Trouble, receive some of the free money that’s suddenly being tossed out like candy from a parade?

Simple. Because this is all your fault.

Now I know, that nice man or woman at the mortgage brokerage swore you were getting a great deal, and that adjustable rate mortgage you agreed to probably wouldn’t go up when its initial term expired, and even if it did it wouldn’t be that much, and even if it was that much you could always refinance and everything would be fine. Am I right?

So you went ahead and bought more house than you could afford with a mortgage that was going to do who-knows-what in a few years time. And why not? Everyone else was doing it, too, and you sure as hell couldn’t afford to look like you weren’t keeping up with the Joneses and the Smiths and the Hempstead-Heaths next door. Am I right?

And along the way you took out a home equity line of credit, because at the time your home’s value was increasing and you couldn’t afford to just let that cash value sit there and do nothing. As a matter of fact, for a while it looked like that big house of yours was going to make money for you the way pigeons produce poop. So you bought some furniture you couldn’t afford, and an expensive car, and some kick-ass vacations and probably a lot of restaurant meals that impressed the Joneses and the Smiths and the Hempstead-Heaths when you bragged about them Monday morning at work. Am I right?

But guess what? All those old clichés your parents used to repeat – things like “There’s no such thing as a free lunch” and “If everyone jumped off a bridge would you want to, too?” and “Chickens always come home to roost” – turned out to be old clichés for a reason. Because they’re true.

But you jumped off that bridge anyway, because some slick salesperson said there was a free lunch down there, and now those chickens have come home to roost.

And don’t say you were suckered into this. Guess what? Everyone in this whole world – from the bum in the gutter to the CEO atop his ivory tower – is trying to sell you something. And ninety-nine times out of a hundred it’s going to benefit them more than you. That’s their job. Yours is keeping your eyes and ears open, and doing your homework so you’re smart enough to tell the difference.

You failed to do that.

Which is why you don’t deserve a bailout.

What you do deserve is to learn a hard lesson, one that’ll be passed on to your children so they don’t grow up to be as stupid and gullible as you some day.

There's the green-eyed fellow we all know and love.

Don't you have any sympathy for folks who might've succumbed to the American Dream of having a big house, 2.5 wives, a dog in the kitchen, and kids in the yard?

As long as they can afford it, those people are welcome to as many kids and dogs and houses as they like. But the moment I have to start paying for it, I want a timeshare.

Well, Michael, that was subtle. Any feelings about Ms. Palin?